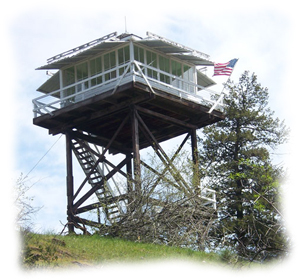 The earliest ﬁre “lookouts” lived in crude and primitive “rag camps,” as they were called, in the early 1900s. The camp consisted of one man, a pup tent, and a convenient tree or high point where a ﬁre ﬁnder was mounted. This point was called a “crow’s nest,” When smoke was spotted, it was often necessary to walk 10 miles or more to ﬁght ﬁre single-handedly.

The Great Depression of the 193o’s brought together federal, state, and private forestry agencies for a common cause — protecting the nation’s woodlands against wildﬁre. With the help of President Roosevelt’s Civilian Conservation Corps (CCC), lookout towers sprouted up across America. As time and funds permitted, log cabins were built for more permanent lookout quarters, and towers of varying heights replaced trees or platforms that had previously served as observation points.

The Graves Mountain Lookout Tower, constructed during the early 1930s in the Colville National Forest, actively functioned as a lookout station location for almost 50 years atop Graves Mountain. Graves Mountain overlooks scenic Sherman Pass in Ferry County at an elevation of 5947 feet. It existed in its original form as a 75-foot high pole tower with a 6’x6’ log lookout cabin on top and a small log cabin for living quarters on the ground below.

During the early years of its use, lightning-caused wildﬁres were too common, conditions were too dry, and roads were far too few. There were no bulldozers or chainsaws (only cross-cut saws) for ﬁre ﬁghting, and reportedly only two government-owned trucks for use in the entire Colville National Forest. As a result, the tall tower/ cabin structure “waned in the breeze and rocked in the wind.” 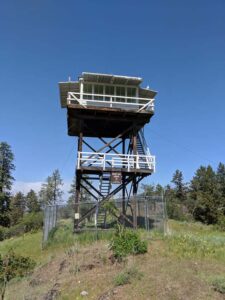 For years, forestry personnel had realized the need for tall towers that would permit a person to live safely during his perpetual ﬁre watch. So, later in 1955, the U. S. Forest Service replaced the original lookout tower on Graves Mountain with a shorter one that stood only 30 feet high, and the log lookout cabin was replaced by a more adequate 14’x14’ structure. Known as the L-4 style, it was a pre-cut fabricated kit transported by pack mule to the mountaintop site.

As the system progressed, the regional forestry procurement ofﬁcer developed a boxed food ration plan in 30, 45, and 60 man/ day quantities. For example, a 30 man/day ration would serve one man for thirty days or thirty men for one day. The wooden boxes, often used as tables and chairs, were also designed by size and weight for pack mules. In addition to rationing, a lookout cookbook was compiled and written to provide good, simple non-fail recipes that the novice could prepare since many lookouts were young people who had never done more than boil water.

Lookouts were the backbone of our forest ﬁre protection system for nearly half a century. The daily routine of a lookout is an interesting story — the long hikes and long months (usually June through October) of solitude; days spent perched atop tall crow’s nests and wide-awake nights weathering horrendous windstorms; vast slopes carpeted with lovely wildﬂowers one day and a snow blizzard the next; deer and mountain goats at the doorstep, along with horseﬂies and gnats. In any event, the cozy little glass cubicles occupied the choicest view in the world.