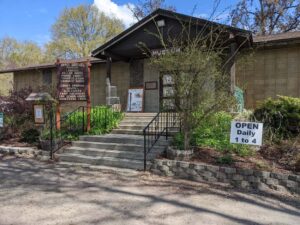 In 1975, the City of Colville entered into an agreement for the Stevens County Historical Society to manage a piece of property and buildings it had received a decade earlier as a gift from the Keller Family. The gift’s terms are that the house and grounds were to be used as a park and museum. That had not been possible for the City before 1975, so the partnership turned out to be a good one.

The Society had some artifacts in a small building on Wynne Street and were in serious need of a museum. With a monetary gilt from Bessie McDowell the ﬁrst building was added to the estate since citizens moved the school house to the grounds. The museum plaque lists the building as The McDowell Museum. There was enough money in the gift to build a modest, concrete block structure.

Although the building was small it was sufﬁcient in 1975 to house the artifacts it had. Volunteers placed some items in the Keller House. For the ﬁrst couple of decades, caretakers lived in the House along with some of the Historical Society’s artifacts. It worked well because the residents paid the lights and heat and let people come through their residence in exchange for living in the house.

At about the same time, in the early 1990s, the Historical Society received a sizable ﬁnancial gift and a gift of furniture and household goods that were originally in the house. This allowed an addition to the museum to be built and enough furnishings so that there did not need to be residents in the house and it became a full time museum.